Athletes are role models on key societal and cultural issues. They provide the ‘voice’ to promote and have the opportunity to impact a specific issue or event and the world as a whole.

The athlete’s discipline elevates them as the ultimate role models. It makes a person have a better work ethic, better problem-solving abilities, more desire to win, better motivational skills, and a competitive spirit needed in every workplace.

One praiseworthy Saudi that is elevating the narrative on athletics is Husein Alireza. Hussein has single-handedly made history by becoming the first Olympic Saudi rower when he took part in the single sculls, brought rowing to Saudi Arabia, and made his Olympic debut in the delayed Tokyo Games, held in summer 2021.

This has been quite a remarkable journey for Husein, who only picked up an oar when studying at Cambridge University in 2016. In a fantastic performance, he reached the quarterfinals of the men’s single sculls. 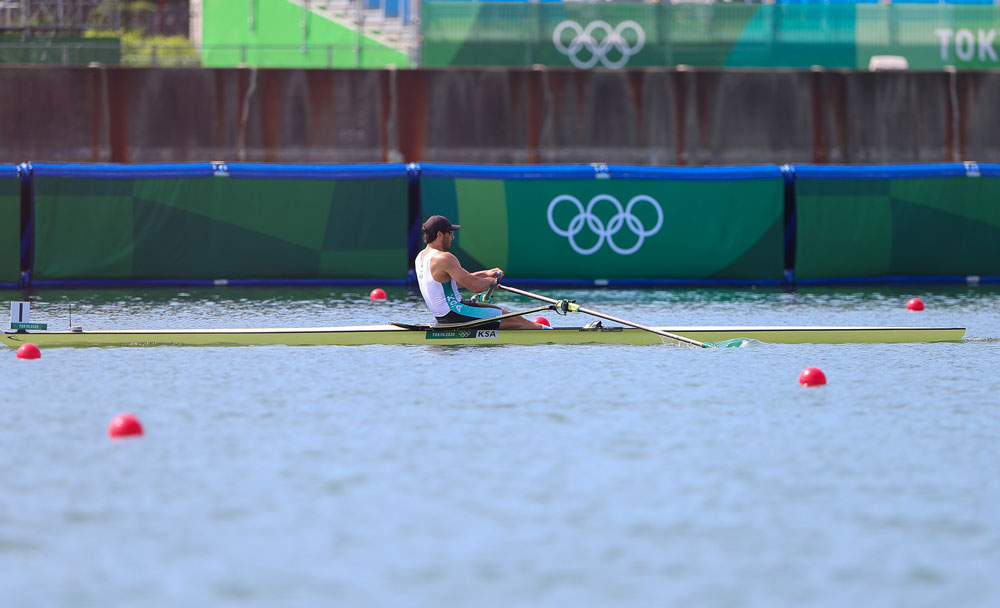 Thank you for taking the time, Husein! Tell us more about how you started your journey into rowing?

I tried rowing for the first time at Cambridge University during my Master’s studies. A friend and I joined the college rowing team as a social activity and to pass the time in-between all the work, without the intention of taking it too seriously. But I spent more time training and improved quickly over the next few months. I reached a respectable level by the end of the year, at which point the college coach encouraged me to compete internationally.

I learnt that the pinnacle of the sport is the Olympic Games and there were just 3 years left until Qualifications and the only way that was achievable was to commit to a full-time training program. Being a full-time athlete was an unorthodox career as a young Saudi, so I have my parents to thank for believing in me and supporting me. There was no Saudi Rowing Federation at the time so we were on our own for a while.

What is the process for a student or anyone to qualify to be part of the rowing team?A fundamental prerequisite for a rower is fitness and strength. It’s one of the most aerobic sports in the world. You breathe more oxygen per minute more than any other sport in the world. However, fitness and strength are achievable through hard work. Therefore the most important traits in an athlete are passion, persistence, and patience (the three P’s). 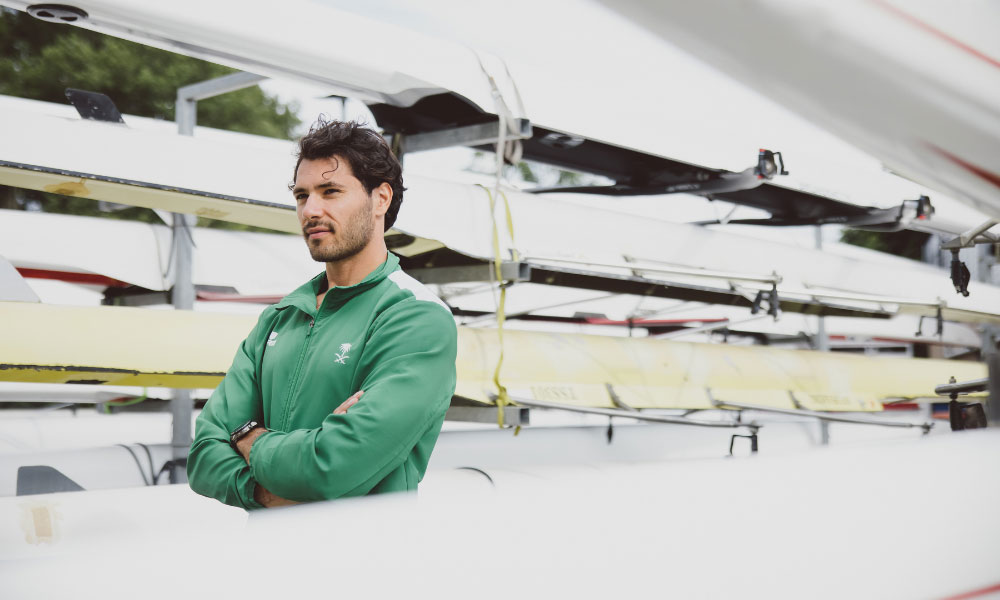 Saudi Arabia has come a long way in athletics and sports, and you are most definitely part of that movement. How can pioneers like you continue to inspire the younger generation to become more proactive in sports and athletics?

The most effective thing one can do is lead by example. Create stories because stories inspire. The reason I was determined to compete in Tokyo, despite the injury, was the certainty that my participation would potentially inspire some talent back home, regardless of the result. My left lung was operating at half capacity following its collapse just over a month before my race. Not ideal in the most aerobic sport on the Olympic calendar. I had to mentally prepare myself for the possibility of a poor result on the biggest sporting stage of all.

However one of the most important lessons I learnt from the last four years is that your only real fear should be not trying, rather than trying and not succeeding. Sounds cliche but it’s true. It’s a valuable lesson I wish I embraced earlier in my career. There’s nothing better than exploring your limits, and nothing worse than wondering what could have been. Embracing this philosophy should encourage the younger generation to be less anxious and try things that they perhaps usually would not out of fear of not succeeding. And so, my situation in Tokyo was the perfect opportunity to demonstrate that philosophy. And as fate would have it, I ended up reaching the Quarterfinals. 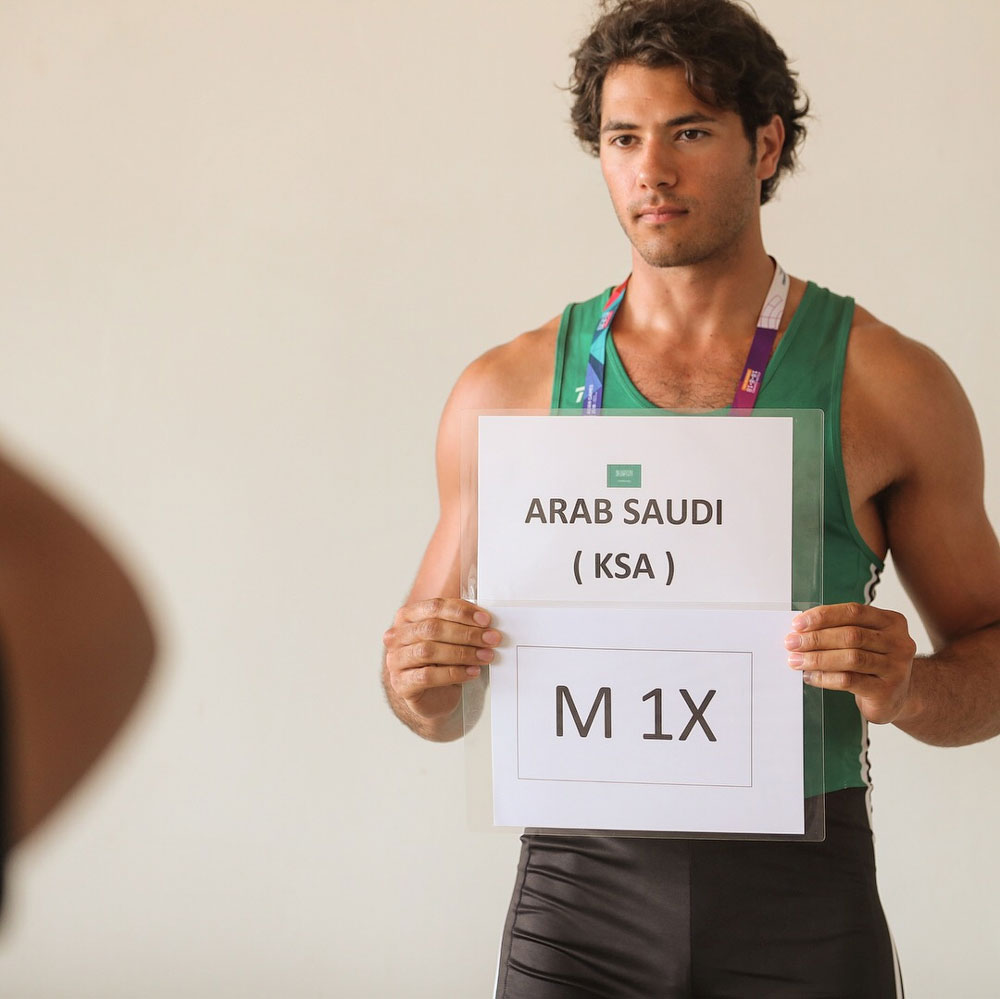 Rowers who take part with others, as a member of a team, have to learn to be an integral part of that team; such as rowing in synchronisation with the others. Is understanding the importance of team building an important factor in rowing?

Rowing is the ultimate teamwork sport, all team members have to work in unison and be both physically and technically exact. Any tiny difference in timing, positioning or mindset can have a negative effect on the speed of the boat. Synchronicity is only achieved through months of consistent training together on the boat and can’t be substituted by training in the gym.

It is a great feeling when achievements are made and your team effort has played a vital role in that success. I believe this can translate into all aspects of life. Do you agree?

I think by default any achievement is a team effort. No matter how hard you try, you will not be able to find one example of a genuine achievement that was performed by a lone human being. There was always a team involved directly or indirectly. Even though I rowed in a Single, there were more than a dozen people with me ‘in spirit’ who played their part. My success is owed to the quality of people I surround myself with, especially family. 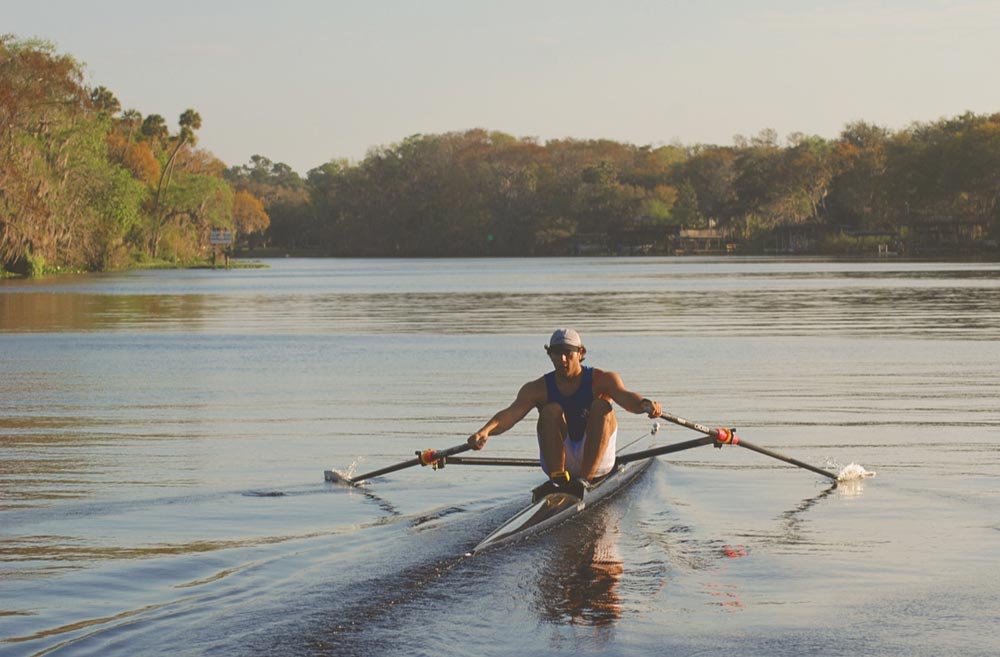 What is the driving force in this type of sport that keeps you inspired and going?

Training in Rowing isn’t a particularly pleasant process. It is long, tough and mundane – 90-minute rows on the machine is routine. In races, you must push your body to its physical and mental limits. I ended up in an ambulance at the 2019 Asian Indoor Championships after securing the bronze medal due to overexertion and heatstroke. So for many rowers, the great payoff comes after winning. There is no feeling quite like it, and the memories last a lifetime. You and your crew become kings – kings for a day.

It is the reward of the months, the years of training in the early morning cold and of the hours spent in the boathouse. The feeling you made yourself as physically strong as you can be and that you’ve gone a long way towards mastering a difficult art that you know can never be fully mastered. The feeling of victory over worthy opponents and the personal satisfaction and pride in knowing that you have reached as close as you can to your peak physical condition, something that few ever do.

And for me, there was the opportunity to become the first Saudi Olympic rower in history. The thought of honouring my country and family with that meant the world to me. 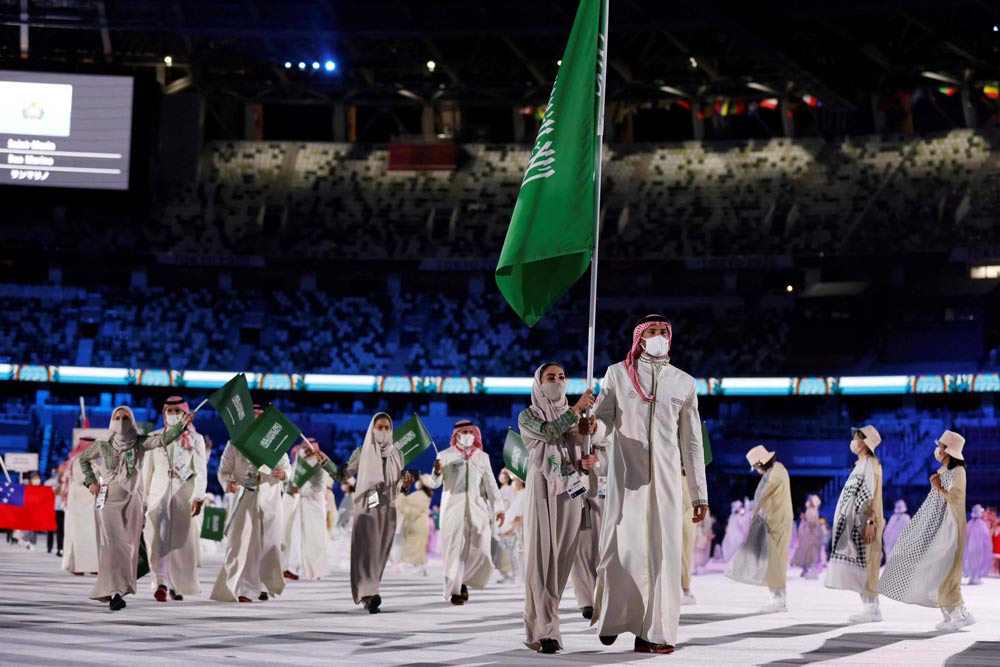 What’s next for Husein?

I physically and mentally need a break from the sport. I was training for 6 hours a day in the year before the Olympics and I’ve achieved everything I set out to achieve, alhamdulillah. But there is still so much more. We’ll see.

What is an important element that an athlete must have and can’t do without?

I could list four or five. But if I were to choose one it would be consistent training. It is the most important aspect of athletic success and forward progress. Even a poorly designed or random training program will produce results if followed consistently and training occurs regularly. 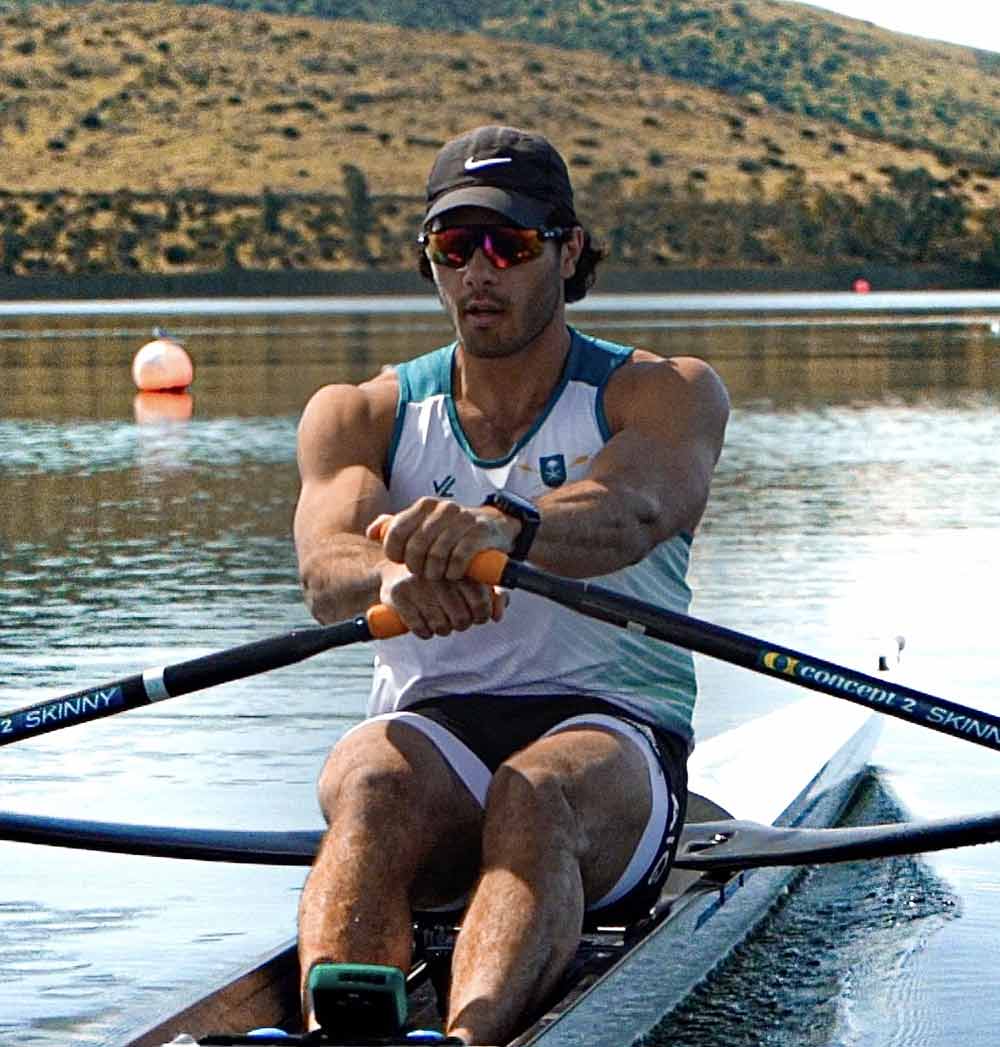 What is style to you?

Attitude. Expression. Confidence. Interestingly, ‘looking’ good can have a competitive advantage in sport through a psychological phenomenon called “enclothed cognition”. It suggests that the clothing a person wears can trigger mental changes that positively affect their performance.

Less is more or more is more?